Sherpa introduced at Granshan2015 in Reading

The Sherpa project was introduced at Granshan, the international conference on non-Latin typeface design and typography in Reading. De Baerdemaeker's presentation focused on one minority script in particular, namely the Lantsa (also referred to as Lantsha, Lentsa, Lanca, Lanydza, or Rañjanā) script, for which specific research was undertaken during De Baerdermaeker's stay in Bhutan.

The decorative Lantsa script is an ancient writing system that originated in India and is derived from Guptan Brahmi. It developed during the eleventh century and has been in use for many generations in India, Nepal (by the 'Newar people'), Tibet, Bhutan, the Himalayan region, and Mongolia. Tibetans and Bhutanese use Lantsa specifically for writing book titles of religious and literary texts that have been translated from Sanskrit to Tibetan, and also for ornamental wood engravings, inscriptions and paintings of Buddhist seed syllables, mantra’s or mandala's in temples, monasteries, stupa’s, palaces and dzongs.

Given that Lantsa has never been represented as a (letterpress or hotmetal) printing fount –other than in writing, calligraphy, lettering and xylography– this first stage of the research project concentrates on finding cultural, stylistic and technological clues for designing and developing a contemporary digital font for the Lantsa writing system, which will be the first typeface of the Sherpa font family. De Baerdemaeker analyses and compares the different examples of Lantsa which he proofed in situ, in archives and library collections during his study visits in Bhutan, Tibet, Mongolia, Nepal, India, and at various European institutes. The talk will be supported by original and rare material especially collected for the project’s research database.

More information about the conference and talk can be found at: 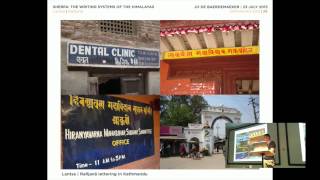 Sherpa introduced at Granshan2015 in Reading